Another Dakota is resurrected - this time in private hands - The former NAA owned VT-CTV is now on display at the Titus Museum of Transportation and Collectibles - owned by Mr. Diljeet Titus. An onsite report by Dipalay Dey .

For years, two Dakotas were languishing on the peripherals of the Palam airport, complete yet neglected, with their paint fading and the fabric surfaces in tatters. The two Daks – one was VT-CTV, the other was VT-AUT were bygones of an era, operated by the National Airport Authorities and the Border Security Force. When the Palam airport was expanded and a massive construction work was done in 2007-2008 on the new runways and the Terminals, apron area where the Dakotas were parked was earmarked for epxansion for terminals. The Dakotas disappeared in 2007. The first one, believed to have disappeared in September 2006 was VT-AUT. About the same time a  Dakota mysteriously appeared at the Flight Kitchen in IGI a few miles to the south east in the airport area and was believed to be the same aircraft.  The second more complete Dakota, VT-CTV disappeared from Palam in March 2007. Its fate was unsolved, though the brief appearance of a Dakota at a Flight Engineering school near Delhi for a few years was pointer in the direction.

Today, after 11 years since it dissappeared, we are pleased to report that VT-CTV is safe and sound and in good hands. In what should be an encouraging trend in the field of vintage aircraft preservation, the Dakota is now in the collection of Mr. Diljeet Titus, a   lawyer and collector of vintage cars. He is the general secretary of the Heritage Motoring Club of India and is well known in the vintage car collection circle.

Mr. Titus had acquired VT-CTV from the Airports Authoritiy in 2004, and after spending time in transit, almost ten years later in 2014, it has been put up for display at his Titus Museum of Transportation and Collectibles, which is located at village Junapur in South Delhi.

The aircraft started its life as a as C-47A-50-DL [C/No MSN 10178]built by Douglas its Long Beach factory in California, USA. Taken on Strength/Charge with the United States Army Air Force with s/n 42-24316 for operations in the Second World War. A data plate within the aircraft exists on the acceptance of this airframe by the USAAF on 2 September 1943. The aircraft  apparently did not see much service and was reported to have been stored till 2 December 1945 [Joe Baugher Serials site]. It went to the civilian registry  as NC63364 in August 1946 with the Flying Tiger airlines. 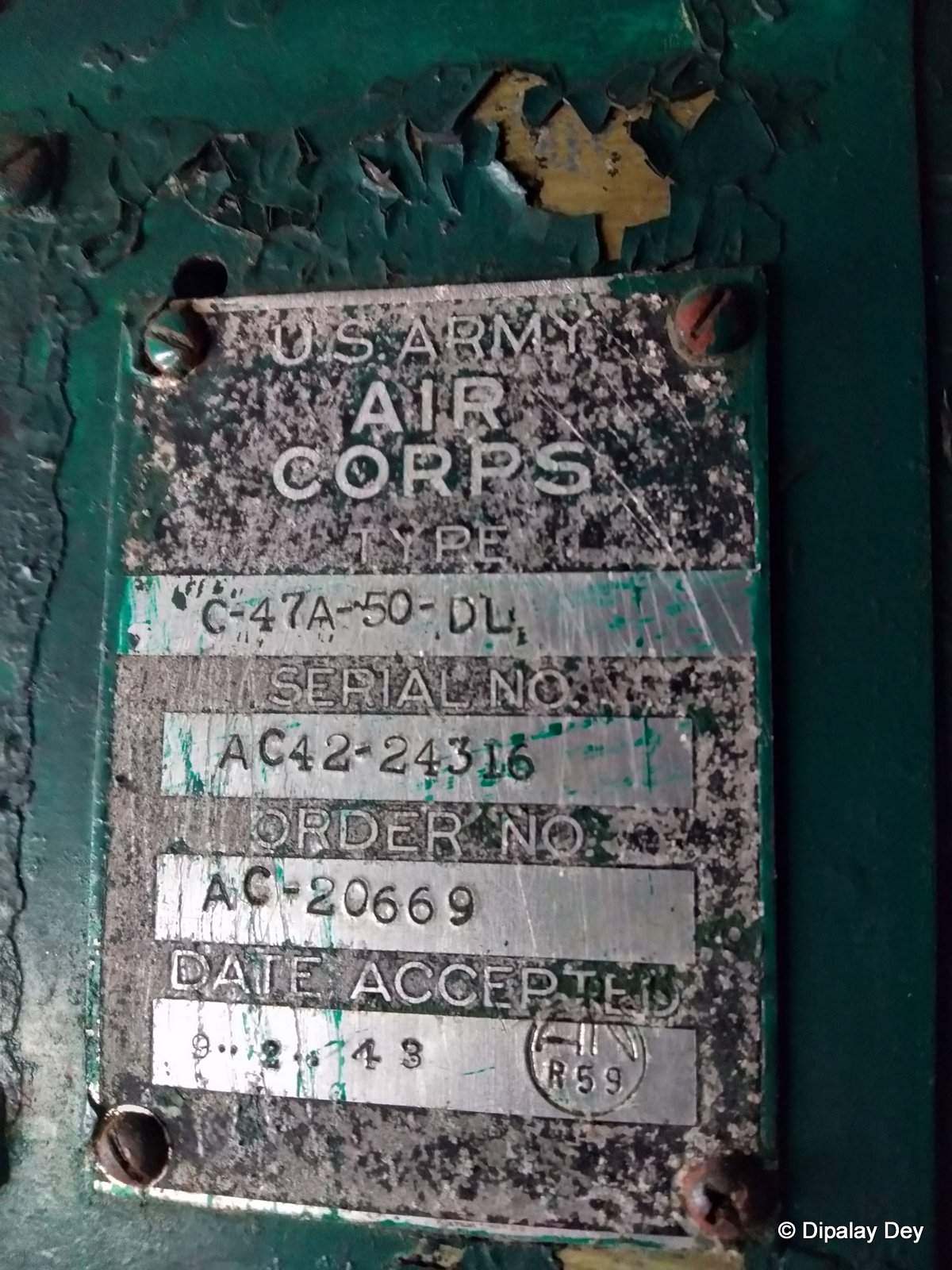 Dataplate showing the acceptance by the US Air Force.

It landed up in India in 1948, when its Certificate was issued for VT-CTV , the first owner being Indian Overseas Airline Ltd. The aircraft was sold to Metcaero Enginess limited on 24 May 1951, and later acquired by the Government of India, DGCA on 19th April 1952. It stayed with the Government for the next five decades, having been operated by the National Airport Authority, its last owner.  This was the time that it was captured in active service by veteran Aviation photographer Jimmy Wadia.

Dakota VT-CTV seen at the IGI Airport in Palam in 2004 : Photo by Charles Falk. (Link takes you to Airliners.net)

Perhaps towards the late 90s, or early 2000s, the aircraft found itself parked on the apron opposite the Terminal 1 area. In 2003, it was towed to the far west end of the main runway and remained there till 2007 – at which point the aircraft disappeared before it turned up in the private hands.

When Dipalay Dey visited the aircraft, it is located at the Titus Museum of Transportation and Collectibles at Junapur village as mentioned earlier. The museum is not open on all days – it is a privately owned collection and thus is open on some occasional days.  For this visit, Mr. Titus invited Dipalay and others over and gave them an overview of the aircraft, which included touring the inside of the Dakota. Over the years, the Dakota has lost its original NAA livery, but the current paint scheme is in sync with the designs and patterns that Dakota aircraft in the late 1940s and 1950s used to have. The inside of the aircraft is clean, and has been kept in original “as found” condition. 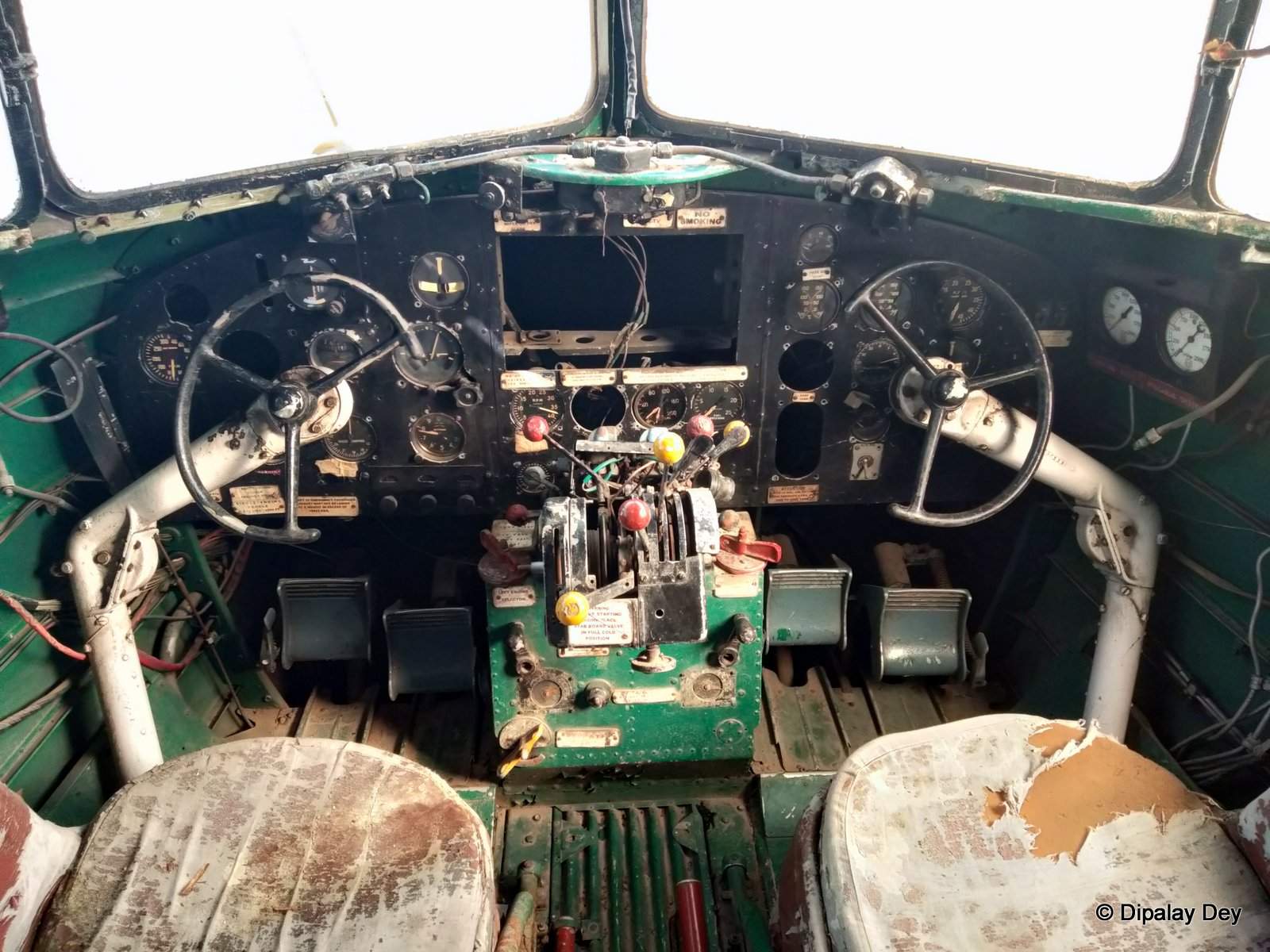 This is one of the first examples of a private Indian citizen acquiring a vintage aircraft for preservation within India. Previously such feats were only possible by corporate houses (eg: The Singhanias and the Birlas), or by individuals acquiring aircraft for other commercial purposes (Aero Engineering technical institutes, Restaurants and Amusement parks). This is a rare case of an individual buying an aircraft for the sole purpose of preserving it.  This is a significant milestone for Indian vintage aircraft movement and we wish to see this trend continue.

Our Thanks to Mr. Diljeet Titus for the invitation and permission to visit his museum.