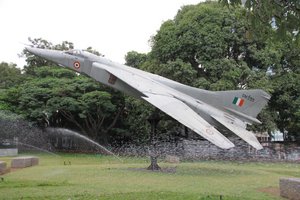 The National Military Memorial in the heart of Bangalore is the best kept secret - in terms of military relics, warbird and history memorabilia.

The memorial is the baby of two distinguished citzens of Bangalore.  The first is Air Commodore M K Chandrasekhar VM,  a former pilot in the IAF and his son Mr. Rajeev Chandrasekhar, who is a Member of Parliament, and founder of the Flags of Honour foundation.  The design for the Memorial Park is done by Ms Mathew & Ghosh Architects, an award winning architect firm. Their design for Freedom Park was chosen as the best from the hundreds that were submitted by the government. BDA evaluated the design submitted for Memorial Park by the architects firm and selected them to build the project. The NMM was built in a 7.5 acres parkarea adjacent to Indira Gandhi Musical Fountain Park in the heart of Bangalore and boasts several unique features.

NMM Park will also have the tallest flag mast in India at 65 metres (around 213 feet). The flag mast adorns the country's largest national flag measuring 48 x78 feet.  The memorial space consists of tall granite columns with the names of more than 22,000 soldiers, airmen and seamen who laid down their lives in various wars since Independence. At the time of writing this is the only memorial in India where all the names are etched in one place much like the 'Vietnam war memorial' in Washington DC.

An almost underground  10,000- square-foot motivation hall exists below the surface,  with various military artifacts, information boards and models displayed. The motivation hall has a number of aviation related artifiacts. On display are plaques with badges and crests of various units, regiments and squadrons of the Indian Armed Forces.  It is outside the motivational hall and beyond the commemoration area that the actual military hardware is on display.

Representing the IAF is the MiG-23BN SM255, mounted on a pole. The aircraft is displayed in a nose up, climbing, wings swept back attitude.

SM255 is first noted in March 2011, just months after the construction of the memorial started in earnest. SM255 is not the only relic of aviation on display. Inside the motivational hall, an ejection seat from MiG-23 SM279 has been stored and is being prepped as a display item.

Apart from the aircraft, the NMM park also sports several other examples of military hardware. Based entirely on the efforts of Air Commdore Chandrasekhar, the DRDO had donated several scale models of the missles under development. An early prototype of an Arjun Main Battle tank, a BTR60 APC and a Tatra Bridge Layer truck are also on display. The Arjun MBT Is probably the only one on display around the country.

The Navy is represented by two large scale models of its ships – built in a covered enclosure in one corner of the park.

The Memorial is still undergoing completion. The public can visit all areas today without any special permission. When it gets completed, the memorial, combined with the motivational hall has the potential to be compared with the museums and displays that one encounters while travelling abroad.

Further Reading:
More images of the memorial can be found on the Bharat Rakshak Site.

Hawker Hunter [A467] at Indian Institute of Science

Hawker Hunter [A467] at Indian Institute of Science