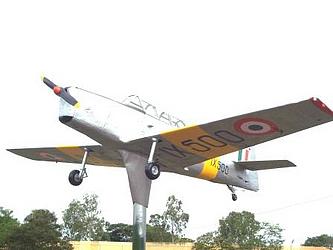 In recent years, the Harvard had been joined by a HAL HT-2 that has been pole mounted. Thankfully it still carries the original serial number IX500 which should give us an idea of its history at some point of time.

IX500 appears to be the 39th HT-2 in IAF service based on the sequence. The aircraft appears complete in its perch position.