There is always a thrill in discovering a warbird hidden away in plain sight in the middle of a major metropolitan city - Gnat E359 at a major park in PUne provided such a moment for Sumeet Shetty who contributed these photos of the aircraft. The thrill is however tempered by the sad state of the aircraft - ravaged by neglect and by abuse of park visitors.

One of our site contributor, Sumeet Shetty was getting ready for a photography outing – to take photographs of the well known HAL HF-24 Marut on display at the Kamala Nehru park in Pune. While in conversation with friends, one of them mentioned the presence of a Gnat at a park in the Kothrud area in Pune. The Gnat was located at the Tatyasaheb Thorat Udyan Park in Kothrud area. This came as a suprise to Sumeet as he had been to the park a number of times but never saw this aircraft.

In due course Sumeet visited the park and tooks several photographs of the aircraft. The Gnat, a HAL Production example bears the serial E359. This puts the aircraft as an example that was probably produced just after the 1971 war was completed. The aircraft was placed in the park after a formal presentation on 5th March 1987 by Air Marshal M L Sethi. An information board in Marathi provides details of the same. 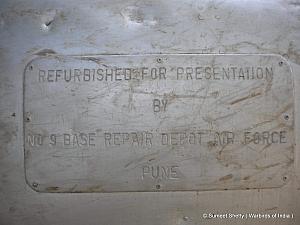 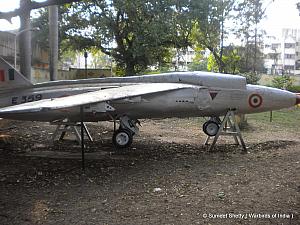 The aircraft is in  a rather bad state. Damage to the components all around. A hastily revitted metal sheet doing canopy duty in place of proper perspex canopy, and damage to the lower fuselage due to the pressure of being displayed on metal stands.

A rivetted plate on the fuselage mentions that the aircraft was refurbished for presentation by No.9 Base Repair Depot in Pune.

Its not clear if the makeshift canopy was the handy work of the BRD before the presentation to the park or some kind of a fix years later.

Though the aircraft has the tail number painted as E359, it curiously carries different numbers painted on the undercarraige doors. The digits 41 appear on the main undercarraige wheel doors.

“It is not in a very great condition. I was told that it was painted a couple of months ago, so don’t know if there were any different signs/marks on it. Apparently children from a nearby slum come there everyday and play with it. The metal has gone in at a number of places. The children even broke the right side inboard flap (See Pic), but that has been retained by the alert park authorities. They are now planning to put a fencing around, so that no one can go close to it.”

The Park is located in Western Pune in the Kothrud Area. it is on the D P Road, close to the Karve Statue junction. (Link)

A detailed walkaround with 45 photographs can be seen in our gallery:

All photographs Copyright of Sumeet Shetty