A new museum is coming up outside the Cochin International Airport. Despite some ambitious plans, only one Iskra aircraft has been confirmed to be an exhibit as of now.

A new museum is coming up outside the Cochin International Airport. Despite some ambitious plans, only one Iskra aircraft has been confirmed to be an exhibit as of now. 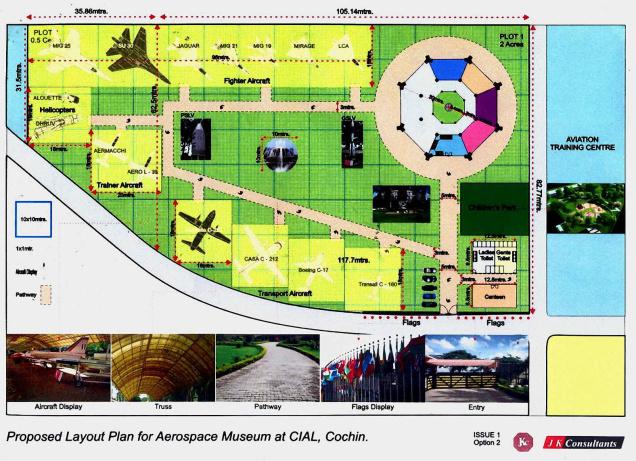 Kochi: Artist’s view of the proposed layout plan of Aerospace Museum at CIAL, Nedumbassery. Special Arrangement. (Editor’s Note: A rather ambitious proposal showing some latest aircraft profiles as part of the display!)

The aerospace museum, proposed by the Cochin International Airport Limited (CIAL) on its property is set to be launched by the beginning of next year.

According to CIAL officials, the construction on the museum on the 2.5-acre plot near the land marked out for developing the first phase of the industrial park is progressing fast.

The project has been designed to benefit the students of CIAL Academy and aviation engineering courses, they said.

CIAL is now in the process of determining the configuration of the display and a blueprint of the museum has been prepared by a Bangalore-based consultant.

The construction of the museum building is expected to be completed in two months.

The airport company proposes to house in the area transport, trainer and fighter planes and it has approached the Ministry of Defence, the National Aviation Company of India Limited and Hindustan Aeronautics Limited, seeking the possibility of getting some older airplanes as museum pieces. The total cost of the project is estimated to be Rs.3 crore.

The museum will showcase the origin and evolution of the global aviation industry to its present high-profile status.

It will also display a variety of aircraft engines, other components, choppers and rockets accompanied by a brief description on each of the items.

A separate segment presenting the history and growth of aviation as a commercial venture with special emphasis on the industry’s various stages of evolution in India will also be set up.

In addition, CIAL also plans to exhibit the replicas of various aircraft ranging from the oldest ones to the advanced new generation jets as also the miniature models of the most famous airports across the globe, demonstrations of scientific experiments involving aircraft and flags of different countries.

The new venture is expected to draw a large number of conducted tours from schools to the airport apart from appealing to the tourist traffic through the airport and the general public.

The airport company also plans to set up a children’s park and canteen facility for the visitors to the museum.

Another report by M Anantha Krishnan of Aviation week appears on his blog TarMAK007 http://tarmak007.blogspot.com/2010/08/cial-to-unveil-airport-museum-by-year.html