Rotor India, The official journal of the Rotary Wing Society of India has published an article from our sister site 1971War.com on the Meghna Heli Lift in its December 2004 issue.

Blue Glory, The official news letter of Air HQ reproduces the article on Subroto Mukerjee from the ‘Legends’ section of Bharat Rakshak.

Military Technology,  Feb 2004 , a magazine published from Germany publishes a photo of a MiG-21 Bison  from our archives as well as a number of pictures from Bharat Rakshak. But I just wish these guys had informed us about using our photos in the first place. Miltech used nearly a dozen pictures from Bharat Rakshak, but made no effort to either inform us or send us a sample copy. This issue was picked off the footpath vendors and imagine our surprise!

Le Fana de L’Aviation,  Feb 2004 , a magazine published from France borrows a photo and a small report from our website on Spitfire MV-459. ‘Warbirds of India’ gets a mention in the credits. 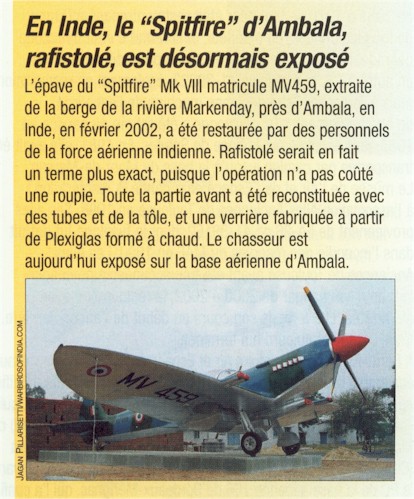 WoI is also featured in the ‘Triple Whisky’ Section, the recommended Links section of flypast