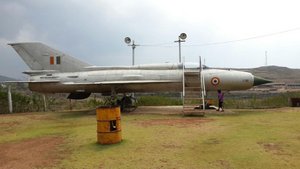 MiG-21FL [Type77] C703 stands guard on a hill at the Biju Patnaik Aviation Museum at Sunabeda (Koraput) at the HAL Township.

HAL opened a new museum at Sunabeda in mid-2000s. Though known earlier as the Sunabeda Aeronautics Museum, or the HAL Aeronautics Museum, it was later renamed as the Biju Patnaik Aeronautical Museum and houses exhibits related of the HAL engine factory. The association with Biju Patnaik goes back to the fact that he was instrumental in getting the HAL factory set up at Sunabeda as the Chief Minister of Orissa at that time. A statue of Patnaik was erected in 2010 outside the museum.

Among the artifacts is a MiG-21FL [Type-77], No. C703, and an R-11 Tumansky engined that has been sectioned off to create a cutaway display. Both these items are stored outside the main building, with the engine displayed under a carport-type of a shed.

Among the unique aspects of C703 is the fact that its nosecone is in an ‘extended’ position. The MiG-21s nose cone is in the center of the air intake and is either extended or retracted depending on the phase of the flight to smoothen the airflow around the engine. This aircraft’s nosecone presents a different look by being in the extended position on the ground.

HAL placed a step ladder next to the cockpit to enable people to peek inside the cockpit. It is assumed that the cockpit is not stripped bare and is functional to look at with the ejection seat, controls and instrument panels.

An analysis of the imagery indicates that the MiG was placed on site by 2011.