The Indian Air Force is all set to donate a vintage C-47 Dakota to the Bangladesh Air Force. This Dakota, from the IAF Museum's collection - IJ817 is one of the two currently held by it in Palam. 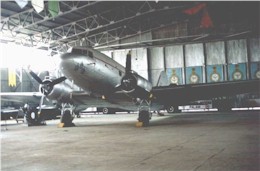 India is presenting a unique gift to its friendly neighbour tomorrow—a Dakota aircraft, which will be showcased in a war museum of Dhaka.

This comes in the wake of a request from the Bangladesh Air Force to have an example of the Dakota in their museum at Tezgaon.

During the 1971 War, the IAF had transferred a Dakota from its Eastern Air Command Communication Flight to the newly raised “Kilo Flight”, consisting of Bengali defectors. This formed the Aviation component of the Mukti Bahini liberation force in East Pakistan.

This Dakota was modified to carry bombs and pilots of the PIA and PPF trained on it in the events leading upto the war.

Post Liberation, the Dakota was transferred to the Biman airlines but was lost in a crash in February 1972.

So recently the BAF requested the IAF for an example and the IAF decided to donate one of the two DC-3s it had at Palam to the BAF’s collection. The BAF already has four Indian donated aircraft at their museum in Tezgaon. These include a DHC-3 Otter, a Folland Gnat, a MiG-21FL  and a Hawker Hunter.

The example that will be handed over, IJ817 is known as the Silver Dakota (The other one being pained yellow). It has been parked outdoors for years pending the expansion of the display area.

This precious trophy will formally be handed over to the visiting Air Chief of Bangladesh Air Marshal Muhammad Enamul Bari in a special ceremony, which will be organised here at Palam Airport.

Update: The Aircraft was presented by the C-in-C WAC, Air Marshal S  S Soman at a ceremony on September 18th.