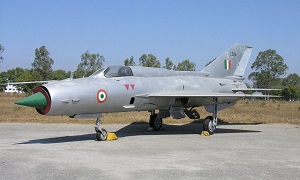 In early 2009, among the spurt of various airframes finding their way to AFA Dundigal, was a MiG-21FL (Type77). This MiG-21, serial number C584 was the second Type 77 with the AFA. The first one, C1168, displayed at the Cadets Mess had arrived more than three decades earlier.

The aircraft, being a recent arrival is in much better shape and condition than its predecessor.  The aircraft did appear to be missing the Angle of Attack vane/probe on the port side, but appeared in good condition overall.

The aircraft spent a few months parked at a temporary spot, while a suitable spot was searched for to locate the aircraft.  Sure enough in mid 2009, the eastern corner of the “Vampire Triangle” was earmarked for C584. Soon a platform was built and C584 ‘installed’ in the triangle.