Cyclone Hud Hud has wreaked havoc when it made land-fall at Visakhapatnam. These rather sad and painful photographs shows the damage to the Sea Hawk at the Victory at Sea Memorial in Visakhapatnam.

2014 October 12 : This rather heart-breaking photograph arrived today that shows the Hawker Sea-Hawk IN240 that was displayed on a concrete pylon at the Beach now flipped over onto the ground due to the gale force winds.

There seems to be extensive damage to teh canopy, tail and elevators. 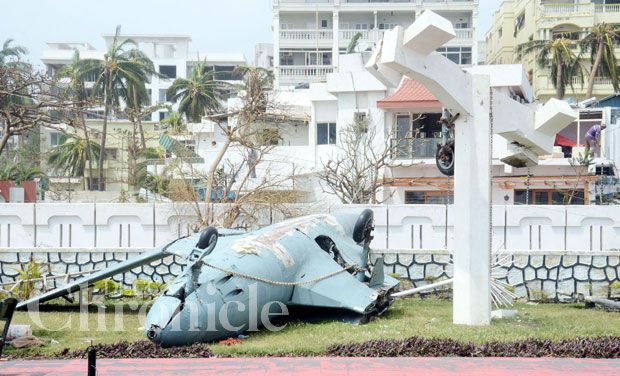 A second photograph published by the Decca Chronicle shows more details of the damage. The aircraft ‘toppled over’ after one of the supporting concrete beams on the pylon broke. The starboard undercarraige leg can still be seen dangling from the concrete beams.

The starboard wing seems to have folded under the aircraft and may have ‘broken off’ and cushioned the damage.

Once Vizag gets back to its feat and builds back the infrastructure lost, we hope the Navy or the city would restore this bird back to display status. This time, perhaps keep it anchored to the ground?